There are 2 sections to this page - 'First Time Windfoiling' by John Lymer, followed by 'Competitive & World Championship Windfoiling' by Jennie Roberts. You can't say we don't try to cover all the bases! As time goes on, maybe we'll be able to complete the sandwich with some of the learning to progress between these two extremes?

This article gives some first impressions of windfoiling, learnt from just a single outing, preceded by watching several helpful YouTube videos. It may help others who are about to embark on their first windfoiling adventure, or help you decide whether or not to give it a go. And for those who have no intention of trying it, hopefully it will at least give an insight into what the buzz is all about.

You can also see a short video of my early efforts here .

I bought a JP Hydrofoil ES 135 board (2021 model) and Neil Pryde Glide Wind 1700 from Robin Hood Watersports in July 2021. This is the cheapest windfoil board RoHo supply and the package was £2099, which was a saving of £150 on the separate prices. A 135 litre board is the middle size in the range and was what was recommended to me, even though I only weight about 62Kg. At 114cm long, it's shorter than any windsurf board and at 85cm wide is almost as wide as a formula board. The foil is aluminium and carbon and is actually a thing of beauty! A foil with large wings was recommended to make the learning process easier. It will also be good in light winds if I become more proficient and later on I can fit a smaller wing to the foil if I need. The foil’s mast is 80cm tall, so it can lift the board quite a height off the water. In my case, this was sometimes followed by a sudden ‘splash down’, but the rounded rails of the board are designed so you get away with that much of the time, rather than being pitched off the front quite so often as you might be with a conventional windsurf board. I wore a helmet and impact vest. 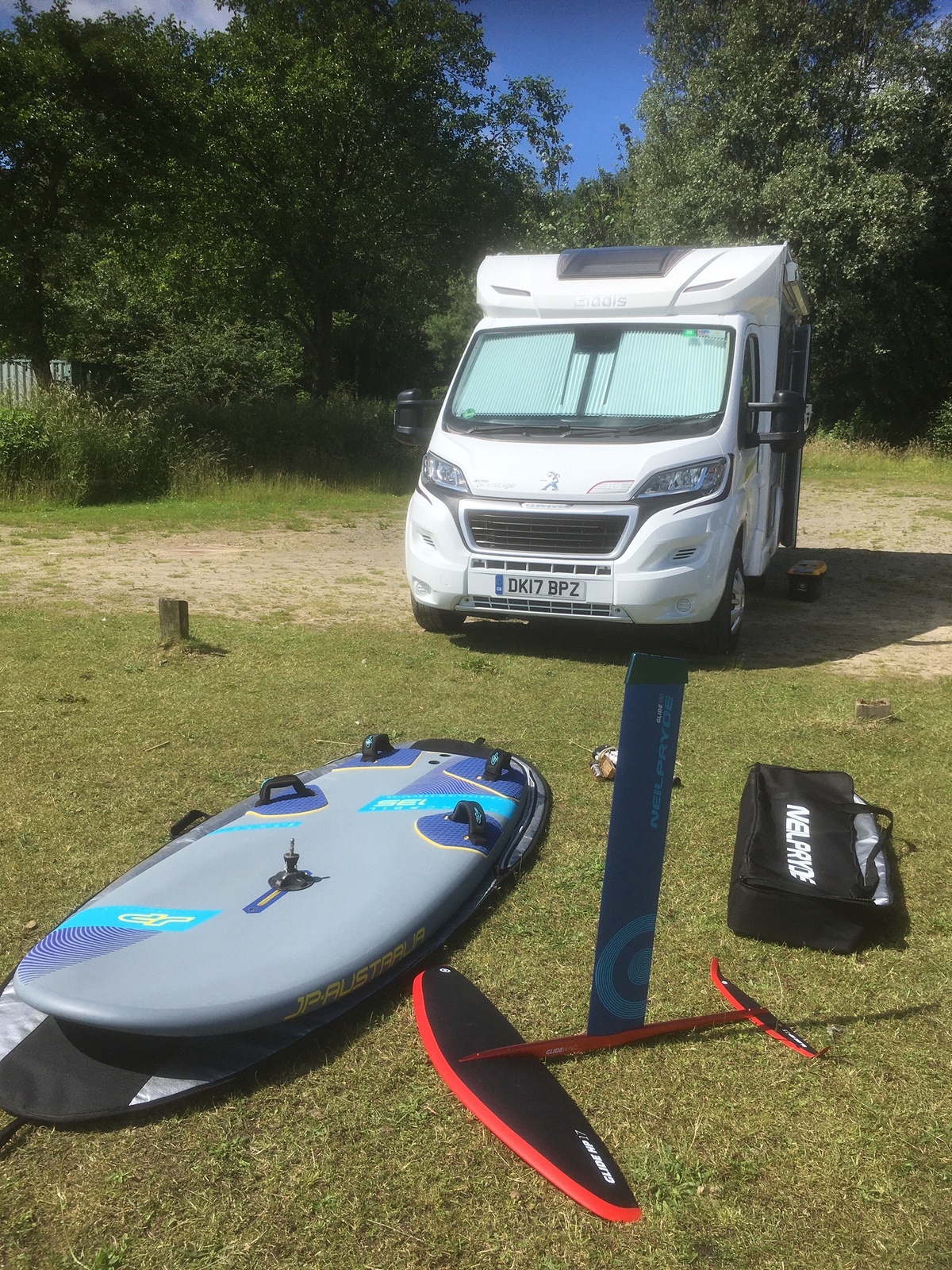 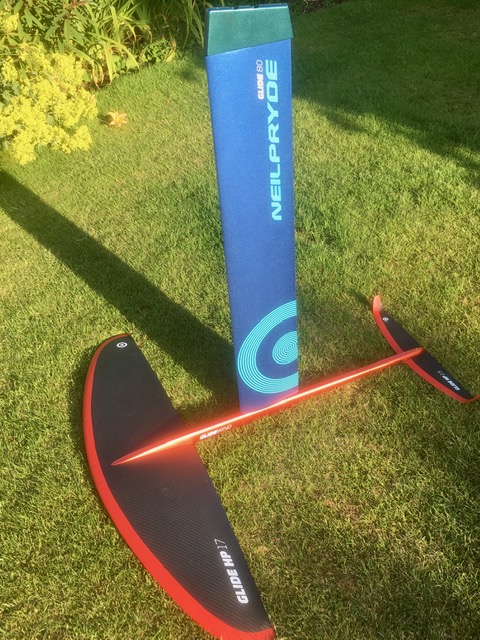 I need to be in waist deep water or more before being able to sail the kit. The stance for foiling is more upright than for windsurfing and it’s important to keep the legs straighter. Any flex in the legs is transmitted to the foil, unintentionally making the board tilt and turn very quickly, at which point I lost control and either splashed down or fell in the water! I found I need the boom about 4” higher because of the more upright stance, though I normally have it a bit lower than recommended. I started with the footstraps outboard and will need to experiment whether that’s best and also try moving them forwards or back. I put the mast base almost as far back as it will go, as recommended by Callum at RoHo and by one of the YouTube videos. The sail should probably be one size (1m2) smaller than you’d normally use.I went out with a 7.5m rig in about 10 knots of wind, then changed down to a 6.5m when the wind increased a little.

YouTube videos recommend you start with your front foot in the strap when the power from the rig starts to come on. You can put the back foot in too, but to start with, probably just in front of the strap is better and maybe a little inboard. I put both feet in the straps on some of my later runs. The foil is very sensitive to shifts in weight, so moving into the straps when airborne isn’t ideal – do it just as the power from the rig comes on. For the first ‘flights’ it’s best not to hook into the harness, though I was using the harness later in my session – it was too hard on my arms otherwise! It’s striking how steeply the board rises out of the water when you weight the back foot. And, if you lean back along the board’s length, you’ll rise. Conversely, shifting weight onto the front foot lowers the board – very useful in bringing things back under control! So, riding at a constant height above the water, to progress beyond the up/down dolphin motion, seems to be a lot about the weight distribution between front and back foot. I’ll need to practice pumping the rig to get on the plane in light winds/with small rigs, but apparently it’s weight on the back foot which is again the key to getting aloft.

The foil has sharp edges, so to ensure some distance between you and it, it’s safest to try and keep hold of the boom when you fall in. You’ll probably want to uphaul more than waterstart for the same reason – thrashing about with your legs to generate lift isn’t such a good idea near those wings!

My first windfoiling outing was a little disconcerting at times for sure, but thoroughly exhilarating! I’m sure it didn’t look pretty, so I’m glad there was no video evidence ... unlike the 2nd outing! There was a lot of up motion, followed by sudden down motion and questionable directional control too. But I also managed some flights of more than 100 metres and to lower the ride height gradually at times too. I’ll count that as a success. I can’t wait to get out and do it all again!

And here are some of the videos I found useful -

Following on from John's article about learning to wind foil, I have transitioned from 'normal' windsurf course racing to foiling racing in January 2020. I spent early summer last year foiling at WPWC getting my gybes and straight line foiling more competent and I later moved to the South coast for a higher variety of conditions, along with being with others on the same pathway to train with. For Summer 2021 I have had the chance to be a full time athlete, after finishing the second year of University in May - the perfect time for the competition season to start. I then went to Cornwall for our first competition of 2021 where I finished 4th Senior girl and 1st under21 in the UK. I am currently writing this in a tent in Silvaplana, Switzerland ahead of the World Championships starting next week.

The kit we race is adapted for higher speeds than the recreational foiling kit, with upwind, downwind and slalom all raced on the same equipment. The kit, IQ Foil, is all one design with the women on 8m2 sails and the men on 9m2 whatever the wind and water state, from 5 to 30 knots. For the foil we have a 900 cm2 front wing, 255 back wing, 115+cm fuselage and 95cm mast. The board is 95cm wide and 220cm long.

See you on the water, Jen 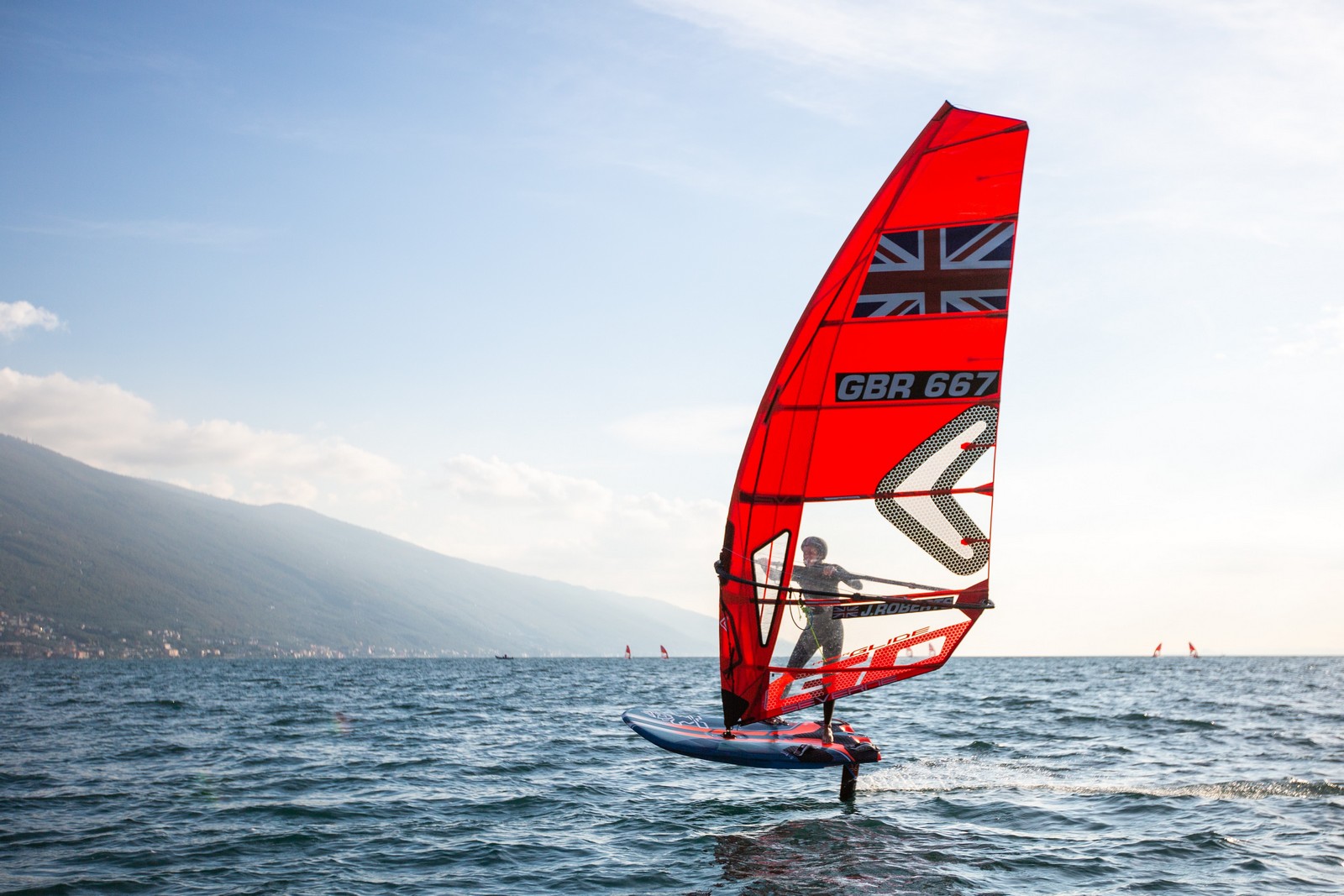 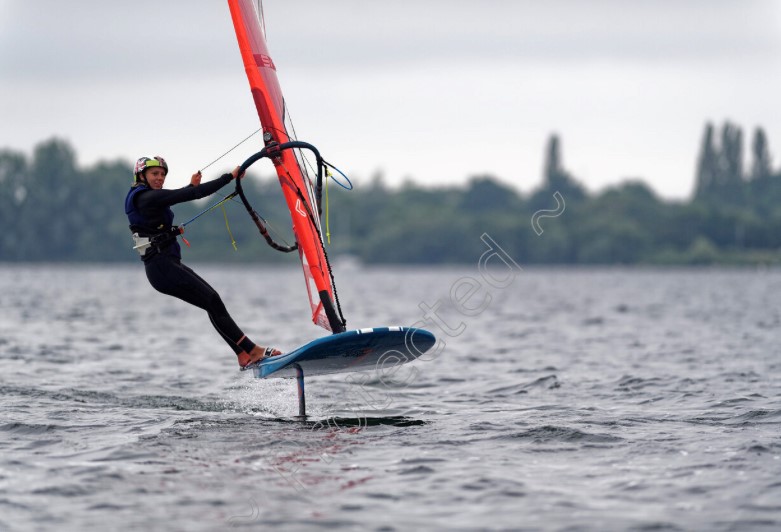 Alright Bjorn, I'll be there about 1. Got to pick the dog up from her haircut first!

Hope to go up tomorrow, not sure how early yet. Will make booking later today.

Anybody going up today (Thursday) or tomorrow? The forecast is looking good! No names on the booking sheet... come on guys, will work really notice if you're not there? ?

Anyone going up tonight Should be up about 6.

Proper stoked after today’s sail. Lovely to see you all guys. Maybe see you on 1st May if the forecast changes.

Ho all, hope those that went today had an awesome session, im off down tomorrow 11ish and just wondered if anyone else was....I tried the booking excel sheet but it seems to be stuck in 9th march?

Alright Bjorn, I'll be there about 1. Got to pick the dog up from her haircut first!

Hope to go up tomorrow, not sure how early yet. Will make booking later today.

Anybody going up today (Thursday) or tomorrow? The forecast is looking good! No names on the booking sheet... come on guys, will work really notice if you're not there? ?

Anyone going up tonight Should be up about 6.

Proper stoked after today’s sail. Lovely to see you all guys. Maybe see you on 1st May if the forecast changes.

Ho all, hope those that went today had an awesome session, im off down tomorrow 11ish and just wondered if anyone else was....I tried the booking excel sheet but it seems to be stuck in 9th march?

We have 97 guests and no members online

We have 97 guests and no members online